Last week I updated my Facebook status as follows: I’m glad auto correct has finally figured out that I NEVER want to type “ducking“. Thanks, phone! Combined with being on the verge of moving into a new house, it reminded me of the first house we ever bought.

Nearly fifteen years ago, FKGuy and I moved from New York City to Florida, and proceeded to buy a house. On New Year’s Eve (yes, this was the verge of Y2K, when everyone thought the world would end) we were closing on our very first house purchase. It was a big deal. As it turned out, we were buying a house from a lunatic.

These were the days when buyers and sellers actually sat around a closing table to finish the deal. It was, fortunately, the last time I would ever be in a room with someone I was either buying from or selling to. There were about a dozen people in the cramped conference room. Us, my parents (yes, I needed some moral support), our attorney, our (completely useless) Realtor, the seller’s Realtor, the seller and his father (the one that actually paid for the house).

Back to the closing table, where I may have brought up such deficiencies.  The guy whose father bought him the house decided to get in my face, pointing and shouting “Listen, sweetheart…” at me. Being called “sweetheart” does not go over well with me, especially by an entitled jerk. It led me to stage whisper to FKGuy “What an asshole.”

That led to the comedic high point of the closing. “DON’T USE THAT POTTY MOUTH IN FRONT OF MY FATHER.” I am honestly surprised that I was able to compose myself, and end my fits of hysterical laughter, in order to finish the transaction.

It is not that often that I get called a potty mouth (although, really, it seems like it should be far more frequent of an occurrence), but that was, by far, the most amusing of them all.

Good morning! Here at the virtual home of  Florida Keys Girl, we are always trying to improve. Today, it is our web […]

You can add site to Hotvsnot.com to increase website traffic This site is added under Florida Directory 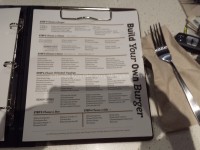 Burger joints seem to be popping up faster than you can say “medium-rare, please.” It seems the yogurt trend has come to […]

There are many people (like my mother) who routinely say things like “Ugh. I can’t believe how often you drive between the […]