Sometimes we just crave certain things. Like, for example, if it is raining with no hope of seeing the sun, and I suddenly feel like I am coming down with a cold, I crave soup. It really doesn’t matter if it is 93 degrees outside. I want soup, and soup I shall have.  (It is helpful that FKGuy is always in a soup mood, too.)

Craving soup brings up a couple of problems. First of all, my soup repertoire is fairly limited thanks to my legume free diet. No (easiest thing on earth to make) split pea soup, no bean soup, no lentil soup. So where does that leave me? Chicken soup is a possibility, but it takes forever and requires quite a few ingredients. Butternut squash soup is also a good possibility, as is tomato soup. In the end, I chose to make French onion soup.

I had to tweak the recipe a bit as we keep kosher, so beef stock and melty cheese together could not happen. I was

certainly having the melted cheese, though, so out went the idea of beef stock. I used a whole lot of red wine, some vegetable stock, paprika, pepper and garlic to add to the body of the onion soup. By the time I finished slicing the onions (and was in tears), I was almost over the need for soup. But I persevered. As the soup was nearing completion, I fished out my onion soup crocks (yes, I have special bowls just for this one marvelous soup) and I realized something: Bread is not on my current diet either. This makes it very difficult to have that soggy piece of cheese-carrying crouton on top of the soup. I then realized something else: fancy Gruyere does not melt beautifully on top of a bowl of soup when there is no bread barrier between the cheese and the soup. Cheese melted in any format – pretty or not – still tastes good.

Despite being mocked on Facebook for my warm weather soup loving, last night I decided to continue the trend. Yes, that would be two nights in a row of delicious, homemade soup. Why? Because it warms the soul, and everybody loves it. (Seriously, if soup were not such a popular food, there would not have been a whole Seinfeld episode dedicated to it.)

Continuing the trend of not-quite-healthy-but-really-tasty soups, last night was cream of mushroom. With three kinds of mushrooms and a homemade mushroom stock, I knew we were in for a treat. It was so good I had some leftovers for breakfast.

What is your favorite weather-inappropriate food? 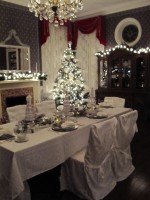 I have been away for nearly a week. I am pretty sure that by now my husband has taken over the entire […] 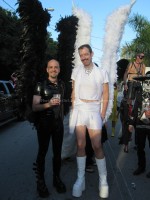 Yes, I know what you are thinking: Rules? What rules? There are no stinkin’ rules at Fantasy Fest! That’s what makes it […]