For years the thought of going to a movie theater, waiting in line (even after buying my tickets on the internet), getting crappy snacks and listening to other people’s cell phones go off was not the most appealing way for me to spend a Saturday evening, or Tuesday afternoon for that matter.

Enter the Tropic Cinema. (Cue “Hallelujah” music here). You must realize that my first visit to the Tropic was on a day when my home was a mere 57 degrees. Yes, that is inside. We have no heat. Alas, the Tropic does and thus the attraction.

I went to see Up In The Air with George Clooney. I will not turn this into a movie review, so suffice it to say that I thought it mediocre. Somewhat entertaining. Whatever, it was nice and warm and cozy in the theater and that is what counts.

But what makes the Tropic the greatest movie theater of all time? It could be the Zabar’s coffee served at the concession stand. After all, the Zabar’s are contributors to the theater. Clearly they have good taste in movie theaters as well as coffee. It could be the selection of wines available by the glass or by the bottle. No, it is not the greatest wine list of all time, but the fact that it exists, along with decent choices and reasonable prices is a BIG deal. It could be the choices of healthy snacks, like toasted pumpkin seeds, or the array of beverages such as San Pelligrino. Perhaps it is the fact that they serve popcorn in sizes like “Date size” (for two) as opposed to “Jumbo”, and they serve it with real butter, not a cheap imitation.

I think the real reason the Tropic is, in my not so humble opinion, the greatest movie theater of all time is because it was started in 1998 by a group of people that truly wanted a cinema in Key West. It is run by a non-profit (yes, you still have to pay for your ticket) and brings quality moviegoing experiences back to Key West. They also have heat.

This Sunday night begins Rosh Hashana, the Jewish New Year. We welcome the year 5777 with gefilte fish and brisket. In honor of […] 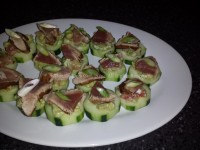 I have said it before and I will say it again: I think it is important to accommodate the dietary needs of […]