It would be absurd to try to cram all of the deliciousness into one post, so I’ll be dividing this among two posts. (I’ll save the controversial Thomas Keller partnership for next time.) In general, the food aboard the Seabourn Quest was excellent. Certainly there were a few misses, but overall it was great.

Although breakfast was served daily in The Restaurant, the limited hours of 8 AM – 9 AM prevented us from eating there, as I was usually just rolling out of bed when they were closing. Instead, we opted for The Colonnade, where after day 1, sparkling water and skim milk cappuccinos were already on order as soon as we walked in. The food is standard fare: eggs, hash browns and various meats in chafing dishes, an assortment of pastries and breads, fruits, granola, cheeses and smoked fish. Also available from the wait staff were eggs cooked to order, pancakes, waffles, lamb chops and steak. There was only one day I had lamb chops for breakfast, mostly because I could.

Most days I opted for a toasted bagel with cream cheese and smoked salmon. (It’s what you eat when you can’t eat eggs.) Then again, I was on vacation, so there was the occasional berry pancakes or Belgium waffle. Tip: you can order half portions of breakfast items, so suddenly those pancakes don’t seem quite so indulgent. On the other hand. those delicious, custard filled donuts are overly indulgent and worth every last calorie. It is good I didn’t try one until one of the last days aboard. We always opted for an outside table, watching the wake of the ship, even if it was a little chilly. After all, that is why they have heaters and blankets.

By the time lunch rolled around, we had needed to make a decision: The Restaurant, Patio Grill or Colonnade? Many days we opted for the Colonnade with themed buffets. One highlight was pasta day (there were two of them – my dream come true), which included a melted leek and mushroom cannelloni that was outstanding, mac and cheese, lasagna, penne arrabbiata and many other selections. The best part? I sampled a little bit of many different items. Another favorite was British pub lunch, with shepherd’s pie, steak pie, seafood pie, and a delicious chicken curry. Of course, there were also fish and chips (the fish was delish, I passed on the chips). Each day there were also salads, including tossed-to-order Caesar, as well as fruits, cheeses, and desserts. I’m sure the desserts were lovely, but I had to save myself for dinner.

After our port stop in Funchal, the chef had bought many local items including fresh fish, mussels and fruit, all of which made an appearance on the buffet over the following two days.

The Restaurant was a favorite for a quiet lunch, as it was never crowded, we always had a lovely window table, and service was impeccable. Oh, and breadsticks. Seabourn breadsticks are addictive. Next time I feel like a big splurge, I will have to make them, along with those custard filled donuts. Yum. Typically at lunch, there were two or three choices of appetizers and entrees, along with the everyday menu of burgers, grilled chicken or steak. Plus, our wine glasses were never empty. (While this is true everywhere on board, it is especially noticeable in The Restaurant.)

The final lunch choice, which we indulged in several times, is the Patio Grill. Located poolside, there several larger tables are often shared with others, enabling us to make new friends. A buffet is set up with salads, sandwiches, pizza and the entree of the day while other items are available for order. The pizza at the patio grill was excellent when we tried it, including the now-infamous seasick day. (“Eat more! You’ll feel better!“) Most offerings were basic but tasty, and the Patio Grill is the one venue where the Thomas Keller Napa Burger and Yountwurst (hot dog) were available daily.

There was a lot of hype surrounding these two items, so I gladly tried the burger, although I did order it without the mayo-based sauce. Served on a brioche bun, with smoked cheddar cheese, lettuce, and tomato, it is delicious. But, it is just a burger with cheddar cheese, so I don’t quite get it. Why was this the Thomas Keller thing they decided to add when they already had a perfectly good burger on the menu? Why not something more inventive? On the other hand, FKGuy, along with many of our new friends, absolutely loved the hot dog. Reports were that it was superb, and the relish topping was delightful as well.

If breakfast and lunch were not enough to tide you over until dinner, afternoon tea was served in the observation bar daily, from 4 PM – 5 PM, with pastries, scones, and little sandwiches. Plus, room service is always available. We ordered breakfast one morning, and caviar and champagne one afternoon.

We did not go hungry on this vacation. Next up on the blog: dinner. Whether with new friends, old friends, fabulous crew members, al fresco, on deck, or in the beautiful Restaurant, dinner was always a treat.

If you have read the blog before, you know that I am obsessed with my awesome rescue mutt, Babka. She is truly […] 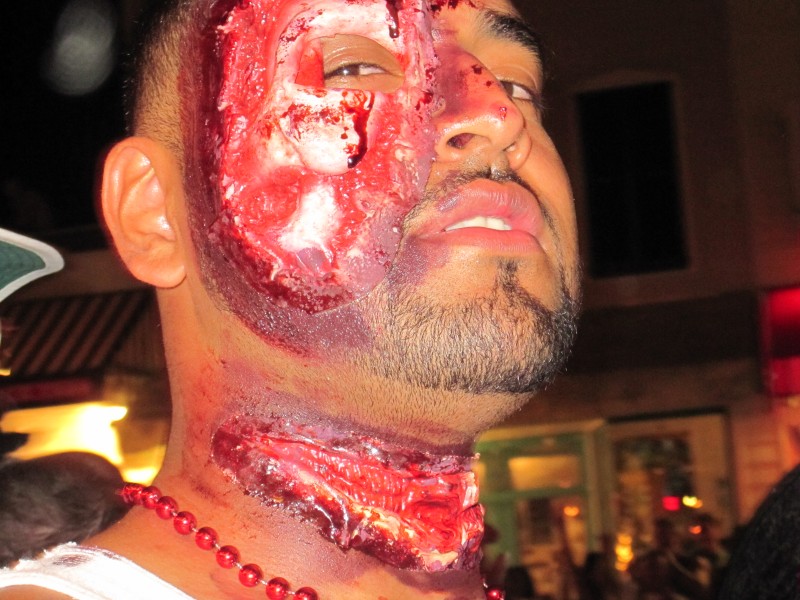 There are very few places in Key West to buy stuff you need, like a stainless steel and silicone cocktail muddler, for […]

Saturday afternoon of Key West Food and Wine Festival always brings a lot of fun, usually in the form of Duval Uncorked. […]

One thought on “Seabourn Quest: The Food, Part 1”