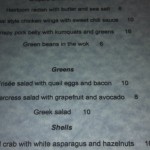 Rumors abounded over what would open on Applerouth Lane, in the former home of Ilona’s. (OK, so maybe not exactly rumors… when I met the chef and one of the owners one evening at the Orchid Bar, he mentioned the forthcoming gastropub.) I broke my first rule of new restaurants – let them work out the kinks for a few months and see if they survive, then go for a meal – just to check it out.The restaurant is a great space, with a large outside dining area, some of which is covered, a nice bar and a few bar tables inside.

Important question #1: Do they allow dogs outside? Yes, they do. Babka will be making a visit soon, I am sure.

The menu is currently pretty small, but interesting. An assortment of “snacks”, salads, shellfish and entrees are available, along with a small wine list and good beers. I am told the wine list will be expanded greatly, you know, when they are really open. Not on day one. Will they allow corkage? No idea. It is as of yet, undecided. However, if the current wine selection is an indication, it should be good. Plus, with the addition of good craft beers, we will not go thirsty.

We sampled a couple of snacks. Right now they are cash only, and as a rule, I don’t carry cash. Cash doesn’t get me frequent flier points and subsequently free business class flights to Europe, so I try to avoid it. I digress. They will take credit cards, and reservations, as soon as their POS system is in place. I am told that should be sometime in the next week or so.

But what about the food? Does Key West really need another restaurant? Apparently so. 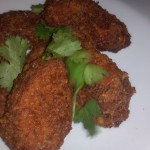 We had the cheese puffs and Thai chicken wings. I imagined the cheese puffs to be filled with gooey cheese, but was mistaken. Instead they are heavenly puffs of pastry with no filling at all. Just the flavor of cheesy goodness. They are light, fluffy and the kind of thing I’d like to make myself, but would not have the patience. They come 6 to an order. The only way they could be improved is if they were about 20 to an order, they are that good.

The wings are fried and come alongside a chili dipping sauce. While they are also tasty, the cheese puffs won round 1: Snacks.

I am looking forward to a return visit once everything is in place and running smoothly, which I am sure will be soon. Expect a full review in a few weeks after a return visit.

Gelato, pastries, a full grocery store with fresh fish and meats, as well as cheeses, and several different restaurants make up Eataly, […]