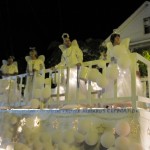 Key west is great. People there will throw a parade for just about anything. From Fantasy Fest nuttiness to the holiday season they have it covered. This year was the first time we have seen the Christmas parade. It was filled with abut 60 floats (one of which was the Miata clubs mini-parade of 20 or so Miatas all decorated), with people throwing candy and generally having a good time. Plus, the ACLU marching in a parade is always a good thing.

Most people were in the holiday spirit, talking to the people around them, having parade parties on porches down Truman Avenue and more. We arrived and found a nice spot to stand about 15 minutes before the parade started. A few minutes into the parade, the person sitting next to me, in a chair, wearing a sequined Santa hat (no, I am not kidding), taps me on the shoulder and says rather rudely “Why don’t you go stand in front of your friends” in essence saying I was blocking his view. Really, is there so much to see that I was blocking? I don’t think so. Was I in the way of his candy hoarding? Again, I think not – he managed to snag plenty. I did see him grab more than a few pieces of candy that were clearly intended for children in his immediate surroundings.

I told him he would be making an appearance on the Grinch page of my blog. 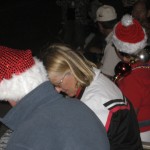 Alas, my camera refused to photograph such a mean person, so we only have the back of his Santa hat here. Really, why even bother going to a parade if you are clearly miserable and have no holiday spirit? 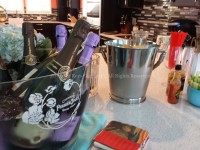 My two business partners in 3 Loud Women always want to talk about guilty pleasures, then make fun of mine because they […]

The past several weeks have been nothing but rain, or so it seems. You know why it seems that way? Because they […]

There is currently a thread over on the Wine Spectator Forums about why there are fewer women that post than men, by a […]

2 thoughts on “The Grinch Who Stole My Parade”