I have a love-hate relationship with my scale. Well, it is more like an ongoing disagreement. I think the number displayed should be vastly different than the number actually being displayed, causing a lot of name calling. Yes, I yell at my scale. I know I am not alone.

When I first posted about my attempt at a Paleo diet, I was pretty gung ho. Now, four months and thirteen pounds later, I am a bit less gung ho. I still always want pasta, like 100% of the time. Except for a few noodles stolen off of a friend’s plate last week, I have been pretty good at avoiding it. I mostly avoid sugar, and I have been trying to avoid processed foods as much as possible. I feel pretty good. I still have about fifteen more pounds to lose, but I will get there.  In fact, I just started running program this week. (By “program” I mean “put on my awesome Brooks and run, extremely slowly, but in my mind it is super fast, until I think I might pass out, which is usually about a mile and a half. Perhaps tomorow will be 2 miles.“)

I feel the need to be perfectly clear here, as to not prompt an intervention. I am not talking about a Biggest Loser style, Rachel lose over half her body weight type of weight loss. I am simply talking about losing the weight that has slowly crept on over the past few years. And it is not anywhere near half my body weight. And I am eating. And exercising. While I think the Biggest Loser has had some successes and brought good habits to the forefront, this lose-so-much-it-could-be-really-unhealthy thing is not what I am talking about.

Back in October, I bought a Fitbit pedometer, at the suggestion of my friend Kyra, who has had more success with weight loss than anyone else I know. She had one and liked it, so I bought. I named him Pedro. Pedro provides me with inspirational messages, like “climb it, Stef” or “let’s move, Stef“. Pedro also sends me inspirational emails letting me know when I am close to my step goal for the day (“Only 1,572 more steps to meet your goal today, get walking!“) Or, if I walk a lot one day, I may get the “Overachiever! You are 2,598 steps beyond your goal! Good job!”

Now, I understand that it is a teeny bit of third grade programming that gets me these inspirational messages, but I don’t care. I love them. But, like the scale, I generally feel that the number is what is important (rationally, I know better, but nobody ever accused me of being a rational person.) More times than I care to admit, I will check the number of steps on Pedro for the day before going to bed. On several occasions, it has been somewhere in the 9,800 – 9,900 range, at which point I feel the need to do laps around the house, and the occasional jumping jack, until I reach 10,000. Then I get my congratulatory email and can go to bed.

You know what else is great about Fitbit? When you input your weight (after cursing the stupid, incorrect scale) it always manages to sneak the number down by a tenth of a pound, and that motivates me to move my butt as well. Every health expert on earth says that it is how you feel, or inches lost, that matters, not the number on the scale. Those are the people that can’t get the number they want, either. I am here to tell you that if your mood varies by the number on the scale every morning: you are not alone. I feel your pain. I will gladly yell at your stupid scale for you, if you like.

The past several weeks have been nothing but rain, or so it seems. You know why it seems that way? Because they […] 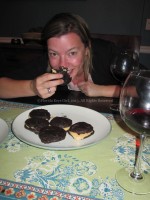 We really should have installed a revolving door at the entrance to our house. We are in the midst of six weekends […]

Pardon me as we clean up the site a bit today. Will be back soon with travel tips, eating adventures and more […]