We had a really good time on that cruise. Most nights we found ourselves in the Observation Bar listening to the awesome

piano player, and our new friend and fellow passenger singing along. He has a very good voice.

Naturally when they were in Key West, we thought it would be fun for him to do some karaoke. Sunday nights, Bobby’s Monkey Bar is the place for karaoke. It is smokey, loud, the drinks are strong, and nobody takes themselves too seriously. It is fabulously Key West.

At some point (while people with decent voices were singing), I may have slipped a little piece of paper with possibly the best karaoke song ever, and my friend’s name, into the mix. The thing is, Paradise by the Dashboard Light is a duet. (You see where this is headed, right?) 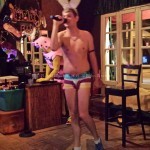 And then there I was, in Bobby’s Monkey Bar, singing (screeching? howling? making other people cringe?) the female parts (and some of the male parts, because, let’s face it, I can’t help myself) while the guy in the bunny ears meandered about in his non-outfit. The worst part of this entire thing, is that I know how bad I sound (really, I’ve seen it on video; it is not pretty) and yet… it was quite fun, so

the likelihood of it happening again is alarmingly high.

Next time I will try to remember to bring earplugs for the crowd.

Last night I had a rather humorous conversation with FKGuy. We were in the car and were talking about my visit to […]

The brochures do a pretty nice job of detailing some of the things to expect onboard, but nothing beats actually being there. […]

I had this blog post started before the news tragedies of the day began to unfold. Reading about senseless murders in Oregon […]

After sailing on numerous cruise lines in the past, last week I had the opportunity to sail aboard the Crown Princess. My […]

One thought on “Karaoke (or, I Lied to You)”