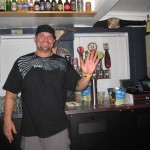 The “Duval Crawl” is famous. People from all over the world come to Key West and drink at the bars both on and off Duval Street. There are even shore excursions from cruise ships offered to do the crawl. Although, I don’t understand why you would need a tour guide to take you up a street to different bars. Plus, new places keep popping up – bars, wine bars, taco joints – and they all have their own unique twist.

The latest trend is Craft Beer. Even grocery stores like Publix have jumped on the bandwagon and carry things like Dogfish Head 90 Minute IPA and Stone IPA. Last year brought openings of several wine bars, as well as The Porch, which features an extensive selection of good beers.

Two weeks ago, Key West’s newest bar, Krawl Off Duval, opened on Southard Street. While I am not a fan of the name (it’s just the Krawl with a K thing that bothers me), I am liking the bar. Opened by a Conch that recently returned home from living in landlocked states, Krawl Off Duval features good beers, like the Stone IPA, and the one I had (after sampling many), Stoudt Double IPA. The selection of beers on tap is limited, but well thought out and extensive enough to try many different ones. they also have plenty of bottled choices.

Patrick, on of the owners and the guy behind the bar, likes to make a concoction of Rogue Chocolate Stout and some sort of Raspberry Lambic. it is delicious and tastes remarkably like an alcoholic Godiva truffle.  Too much of it is likely to give you a sugar high lasting for hours, as it is very sweet.

Krawl has a selection of wines, although that doesn’t seem to be their strength at the moment. Given some time, and learning a whole lot about wine may change that, but right now it is clearly a distributor driven list.

The atmosphere is cozy and friendly. I love it. The upstairs is zoned residential at the moment, so there is not going to be bar service up there anytime soon. Although, the bathroom is located up the stairs. Don’t peek in the medicine cabinet. Just saying.

While we were there, the crowd steadily grew. From a guy in a tux who had been to a gala at the Casa Marina (and thought he was James Bond… clearly, he’s already had enough to drink) to the owner of one of the other local drinking establishments checking out the new place. Everyone was having a good time.

After all this beer drinking you may get hungry. Fortunately, Krawl is right next door to the Four Buoys Wings and Wieners. They even have their POS system linked to the Four Buoys kitchen. Place your order at the bar and the wings get delivered. Wash it all down with a delicious craft beer. Win-win.

Have you been to Krawl? Have you peeked in the medicine cabinet?

Babka doesn’t need an excuse to hang out and play with other dogs. If we are outside and she sees a friend, […]