I started today writing about the Presidential campaign and the upcoming debate. Then I realized that we would have plenty of that in the upcoming months. But today I will share a little more about myself than you wanted to know, and in return I’d like to know how you handle things. So, go ahead, leave a comment, send me an email, whatever floats your boat.

I like to sleep, and I get tired fairly easily. I am not a late night gal (case in point: When Rocky Horror was being shown last week at 8PM, instead of the traditional midnight, I was delighted.) Recently we went to our friends’ house for dinner on a Friday night. Fridays are especially rough as I usually have a meeting at 7AM, and later in the day I am typically in the car for four hours. It is a long day. At this particular meal, we all had a lovely time, and around 10PM as everyone was chatting, I moved myself from the table to sofa and promptly fell asleep for about half an hour.

I should note, these are really good friends, and everyone knows about my propensity for sleeping at inappropriate times. This happens at our house, too. Sometimes friends will come for dinner, and everyone is having a good time, so rather than kicking them out mid-wine, I may sit on the floor for a few minutes to regroup and recharge. (By “sit on the floor” I mean “lay down under the table and take a nap.”) It has happened more than once, I am afraid.

But what to do? I can’t make people leave early when everyone, including FKGuy, is having a good time simply because my eyelids refuse to stay open, can I? I have tried to have several espressos before a dinner party, and that works to a certain degree, but one simply cannot chug espresso throughout a meal in hopes of being cognizant of one’s surroundings past 11 PM.

I know people that are morning people, or night people, and I can safely say I am more of a mid-morning or mid-afternoon kind of person. In the middle of the day I am productive, alert, and often, inspired. But getting up and heading to an exercise class early in the morning leaves me wishing I was still in bed, and staying up late generally results in me asking FKGuy what happened at the end of a particular show, since I have fallen asleep on the couch. (Or in some cases, under the table).

Is it really so terrible that I cannot stay awake as long as other people? I do try to get a nap in on the weekends, but sometimes even that is not enough. 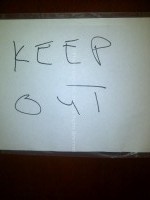 I must have the only husband who needs emergency pants with any frequency. I never hear anyone else talking about pants emergencies. […]

We don’t really live in an era of bringing casseroles to potlucks anymore (at least not in my world). Even if we […]

Memorial Day conjures up a lot of different images for different people. For some it is the first day off since New […]